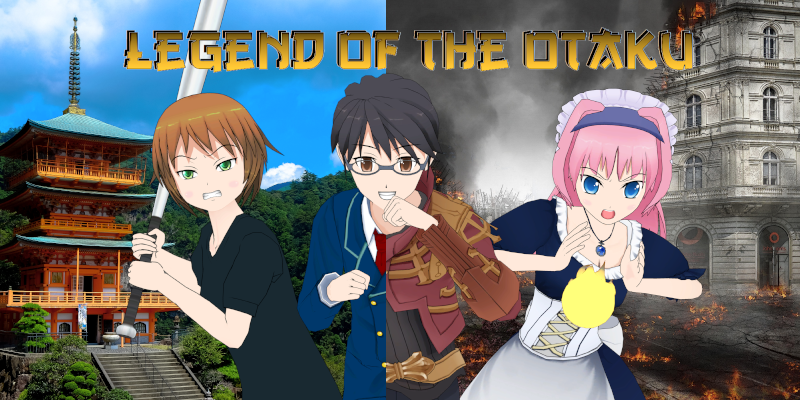 So this update is long overdue - Legend of the Otaku is now available on the Google Play Store. You can find the link on our Download page. And while you're there, please give us a rating, which will help others find our game. Thanks!

One other thing: I will be slowing down the pace of updates. I was trying to post new chapters monthly, but as the size of each update grew, it was harder and harder to keep up. With that in mind, I'm going to try posting updates every other month. However, I am going to be increasing the size of updates, so there will be more to do when a new chapter drops. I'm currently at work on an isekai side mission (though it's definitely not the isekai you're thinking of). More details soon....

Quick update - Legend of the Otaku is now on Itch.io, so please feel free to download from that site as well. And while you're there, please leave a comment, so I know what you all like (and don't like) about the game. Thanks!

It's crazy to think that I posted Chapter 3 slightly more than a month ago. There is so much new content in Chapter 4 - I can't figure out how I got it all done in just one month.

MAIN STORY - So the first big change - Chapter 4. If you remember the end of Chapter 3, a new hero arrives to help out. Tenchi will acquire a new ability (spoiler: stealth mode), but will need to do some ninja training along the way. The finale of Chapter 4 involves a meeting with ninja elders than can go several different ways, based on how you play out the mission.

ONSEN SIDE MISSION - This chapter also includes something I've wanted to work on since I first came up with the idea for LOTO - an onsen mission. Onsen episodes are a staple for most anime series, and Tenchi and his friends deserve one. What's better than an onsen - how about a HAUNTED ONSEN? Also, depending on how you resolve the mission, it's replayable (with different dialogue options).

MORE EQUIPMENT - Is that yen from your delivery missions burning a hole in your pocket? If so, go visit the comic book shop in Downtown. They stock a lot of new gear and items to make those tougher enemies cower in fear.

REFINED GAME MECHANICS - In my rush to get new content out, I didn't spend as much time as I should have making sure everything was balancing. After a month of testing, ability costs, effects, and pricing feel much better.

NEW UI FEATURES - Tired of clicking through menus to get to the map function? Me too. So it's not mapped (no pun intended) to the "M" key. Similarly, your stealth mode is activated using the "V" key (for "VERY" sneaky).

As always, I hope you enjoy the game and tell your friends! If you have any feedback on the game (good or bad), please feel free to email me any time at legendoftheotaku@gmail.com. Also, I'll be attending Anime Expo 2019 this year (more details to come) - if you'll be there, please drop me a line so we can meet.

This morning's update to LOTO includes both bug fixes, but also two separate versions of the game - PG and PG-13. While both versions are substantially similar, the PG-13 version includes a little additional ecchi comedy and a few censored images. Neither version contains actual uncensored nudity (again - not a hentai), but for players who want a more mature playing experience, the PG-13 is an option. However, it was important to me to create a PG version so that younger anime fans can also enjoy the game. I've had some advice against the PG version, pointing out that the under 13 crowd has less "spending power", but that's not what this game is all about. It's about embracing anime fandom in all its forms and giving players the flexibility to play out their own anime stories as much as possible.

No matter your anime tastes, hopefully these versions work for everyone, or at least as many people as possible. If you have any feedback on this change, please feel free to email me any time at legendoftheotaku@gmail.com.

I originally included ecchi comedy because I felt it was reflective of one aspect of anime. The game includes MANY other aspects (comedy, drama, slice of life, action, etc.), but ecchi comedy is a genre of anime that some people (myself included) enjoy. It's not for everyone, and most importantly, not for younger fans. This made me reflect on how inclusive the game would be, essentially excluding the largest audience of anime fans. Thinking about it, I decided that it was more important to me to make a game accessible to ALL anime fans than to include ecchi comedy by default.

But for the ecchi fans out there, have no fear - the game is set to non-ecchi/PG mode by default. However, I will also be releasing a simultaneous version with the ecchi content unlocked, for those who choose to play the game that way. Everybody gets what they want.

I hope this works for everyone, or at least as many people as possible. If you have any feedback on this change, please feel free to email me any time at legendoftheotaku@gmail.com.

So I've been developing Legend of the Otaku for five months now and have released four chapters of the game. It's an anime-based RPG/Visual Novel, with lots of anime-related material (character classes incl. otaku, magical girl, shrine maiden, etc.). Currently, it's an ecchi PG-13, with all nudity behind a Patreon code, but I've been debating whether to modify it to 3 versions: 1) a "general audience" version, where I clip all ecchi jokes, etc.; 2) a PG-13 version (ecchi, but no nudity); and 3) the R-rated version (includes light nudity, but no sex). If I make the switch, now would be the time, without having to do massive amounts of re-writes. Has anyone ever dealt with releasing different versions for different audiences? Do you think there would be enough of an under 13 audience to justify it (recognizing that there would also be no revenue from that audience, based on my current Patreon-only model)?

I'm curious what the fans think. Either way, there will still be an ecchi version, though it may release a little bit slower as I also add in the "PG" content version as well. I think I can keep it manageable, though it would be an interesting writing exercise as well (ex: Anju appears in Tenchi's bathroom in her Valhalla clothes?). If you have any thoughts, please feel free to post them to the Facebook thread or email me at legendoftheotaku@gmail.com

One of the cardinal rules of launching an update is that you will always find a bug the next day that requires a hotfix - case in point.

So if you're starting the game in Chapter 3, you won't experience the bug. However, if you are playing through Chapter 2 into Chapter 3, you will encounter a bug where the events at the end of Chapter 2 replay when you re-enter Tenchi's apartment after the Class 3 battle. The hotfix clears the bug, but if for some reason you don't want to download the fix, there are work-arounds: 1) you can exit out of the game and re-enter directly in Chapter 3 (though you will lose any specialized gear you have purchased - sorry); or 2) you can install the hotfix, load a save game in Chapter 2 and play into Chapter 3. The old save games should still work.

I'm very very sorry for the inconvenience and will do my best to prevent bugs like this in the future.

The update is finally here - brace yourselves! Demon hordes have started infiltrating Kosaten and it's up to Tenchi and his friends to stop them. However, sins of the past threaten to break up our team, just when they need each other the most. New features abound in both the new chapter and old ones (worth a replay):

NOTE FOR MAC USERS - Prior versions had some difficulty saving games, which had something to do with the file permissions from games deployed from a PC. I held back version 0.251 for Mac and Linux because they were unstable, but decided to release v0.27 to both Mac and Linux. I fixed the Linux version myself but don't have access to a Mac, so if any players would like to troubleshoot the Mac version, I would greatly appreciate it.

I LOVE FEEDBACK - See something you like, or something you hate? I want to hear about it. Please feel free to send me an email at legendoftheotaku@gmail.com, send me a tweet, post to my Facebook page, or post in the Reddit or F95 forums. I want this game to include the features that matter most to players, but I won't always know what those are until I hear it from you.

Thanks again for playing and hope you enjoy the game!!!

NEW VERSIONVersion 0.25 is available to Patrons through my Patreon page. For everyone else, it will be available for download beginning on April 15. I've hinted at a few of the new features below, on Twitter, and a couple other sites, but you really need to see them for yourself.

New Graphics - In addition to graphic updates in-game, I've also cleaned up a couple graphics on the social media pages (notice the big new splash image). The other one was really only meant to be a placeholder, then I got too busy working on the actual game to fix it. Hope you like the new one!

Already working on the next version - Didn't take any time off because this next chapter is going to be bananas and I'm going to need all the time I can get. More details in the days to come.

VOTE - If you're a Patron, I have a quiz up on my Patreon page, asking which side quest/dungeon to complete next. I have the storylines mapped out, but I need your help to prioritize which I should finish first.

Thanks again for playing and hope you enjoy the game!!!

Mac Support - Several players have informed me that the game is not saving properly on Mac systems. It appears that this is a file permissions issue, attempting to write to a read-only directory. Even worse: it's common to all RPG Maker MV deployments EXCEPT those deployed from Mac systems, so until this is fixed by Apple/RPG Maker MV, Mac users won't be able to save (sorry).

Dailies - In other news, I'm hard at work on several new features in the game, which I hope you'll like. I just finished a daily quest mechanic, allowing you to do daily ramen delivery missions for XP and money. I'll be expanding on this mechanic going forward, but it's a good way to pick up XP and money if you don't want to fight for it.

More Combat - Speaking of fighting, there is more combat in Chapter 2 than previous chapters, as Tenchi and Anju explore their respective powers. You'll also learn more of the backstory behind Prof. Nakamatsu and several other members of the cast.

Love is in the Air - Finally, I'm laying the groundwork for the first love triangle of the game - stay tuned.

I'm also hard at work on Chapter 1, which I just finished last night. I have a couple finishing touches to put on it (music, sound effects, etc), then playtesting and have it posted within the week. The new version also adds new content to the Prologue, so while there is the option to skip the Prologue in the new version, it may be worth another playthrough.